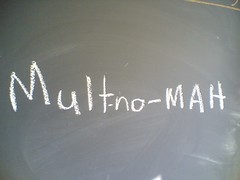 Since I've been to Portland a few times (about 7 now), while my company was there for a conference, I was the one who ended up showing people the city. At one point, during an off-day where we walked around, I yelled out "Multnomah", the name of the county which Portland is the seat, mostly because it's a name worth using as a battle cry. Roland has taken a photo of him scrawling "Mult-no-mah" on a blackboard in chalk, which was at the inaugural Podcast Hotel. Check out Multnomah County Wikipedia page, and Flickr photos tagged with 'multnomah' (mostly photos of Multnomah Falls).