Having found myself unemployed in February, the opportunity for a quick trip to Portland presented itself in the middle of May of this year. I offered to volunteer at a conference called OpenGovWest, where, as the name suggests, people from the governmental, non-profit and information technology gathered to discuss issues surrounding opening the culture of public participation. In return for volunteering my time (which included breakfast setup and taking notes on two sessions), I was able to attend the conference for free. Karen, who spoke at the conference and served as volunteer conference convenor, and I left on an early Thursday morning for a Friday/Saturday conference, taking the train down from Vancouver, B.C. While it was not my first time taking the train south from Canada — I had earlier in the year taken a 4-day trip to Seattle to watch baseball games pitting the Toronto Blue Jays against the Seattle Mariners at Safeco Field and then to Everett for whale watching — it was my first time heading all the way south to Portland.

The train left Pacific Central at 6:30 in the morning, and with a brief stopover in Seattle, we proceeded to Portland. I had arrived at Union Station before, but only ever by Greyhound bus. My initial plan was to stay in Portland from Thursday to Monday, but it made more sense to come back on the Sunday train. Switching my return ticket on Amtrak was a breeze, even if there were only two seats left. If you can deal with the noise from fellow passengers and the opening and closing of the cabin doors, then you don't have to worry about traffic. If you have a device that can both access the Internet wirelessly and plug into an electrical outlet, Amtrak Cascades has you covered with Wi-Fi on trains and a (single) plug at your feet.

(I'm part of the Amtrak Guest Rewards program. If you send me your email address, I can sign you up to get 500 free points, which in turn gets me 500 points!)

First step of the trip, after disembarking from the train, sent me to a T-Mobile store. An aborted attempt during my April Seattle visit to get a U.S. number and data plan, which included my Canadian cell phone provider incorrectly flagging my iPhone as stolen, left me with a $60 bill at the end of that trip. (Not only that, but my iPhone had been incorrectly locked when Apple replaced my original.) This time, with an unlocked phone and a bit more information, I proceeded to the T-Mobile outlet downtown. Since the iPhone 4 requires a micro-SIM, and this T-Mobile outlet did not have a SIM cutter, they sent me next door for a $7 trimming. After a few settings changes I was online.

T-Mobile, at this writing, offers a $1.50 daily fee for 30 MB of unthrottled access to their data network. They call it "web", but it's the full Internet as far as the iPhone is concerned. After 30 MB, the network starts throttling, and all throughout there are a few sites you might not be able to access, as they seem to have some net-nanny software deployed. The only website this affected for me was Untappd, where one can "check in" to beers that one drinks. (Yes, we'll all have a good laugh about that website in the coming years.) Other than that, speed is less an issue than being able to connect to use Google Maps, Twitter, Foursquare, etc. That the pre-paid allowed for voice and text was nice, but I use the Internet so much more than any other service on my cell phone. 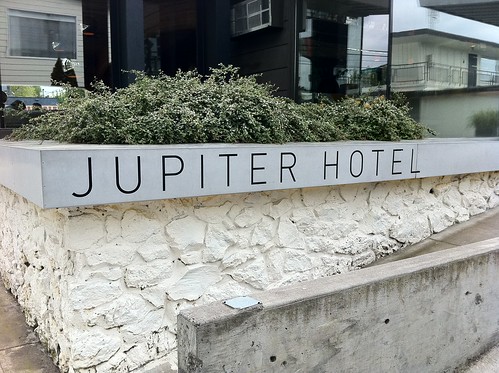 The event was held at the Jupiter Hotel, which we also stayed at for two nights. As the hotel is co-located with the Doug Fir Lounge, we found the noise from the patio outside during Thursday and Friday nights annoying. The hotel attendants made a note of it up front, and once we put in earplugs and fell asleep, it didn't bother us as much as we thought it might. True to its website's description, it had a boutique feel, with chalkboards on the inside and outside of the doors, and we found the inside white decor very pleasant. We are undecided if we'd ever stay there again, but we appreciated staying at the same hotel as the conference venue, meaning we could sleep an extra few minutes without worrying about a daily commute. The hotel is located about a half an hour's walk from downtown Portland, just enough to soak in some rays and take in the sights from across the bridge. 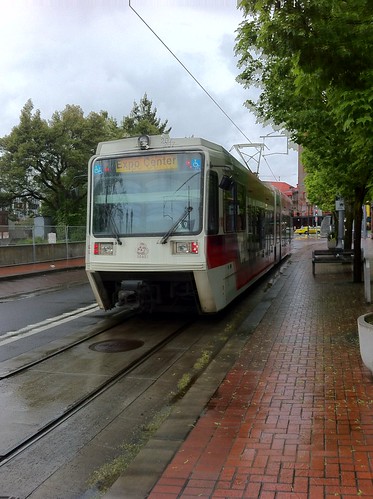 cMAX heading past Union Station in Portland
10 years ago ago at Chinatown, Portland, Oregon, United States by Richard Eriksson. 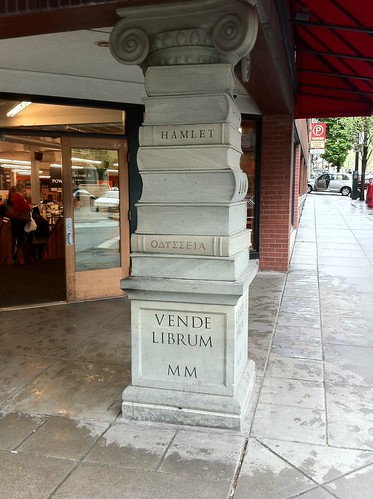 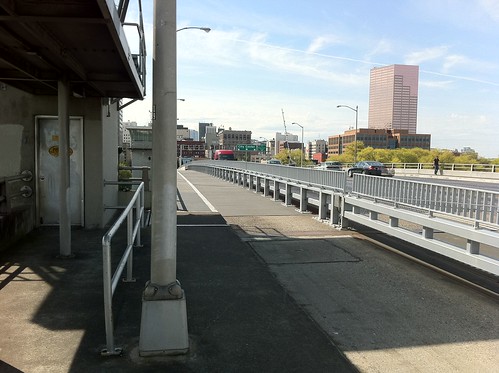 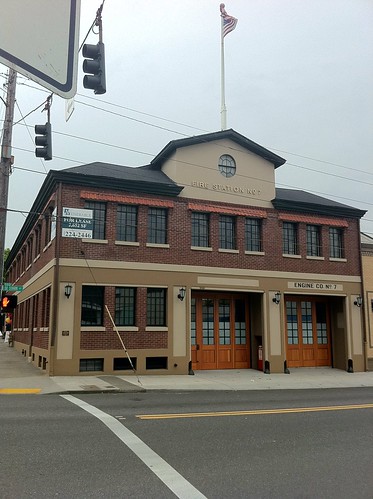 cEngine Co. No. 7
10 years ago ago at Buckman, Portland, Oregon, United States by Richard Eriksson. 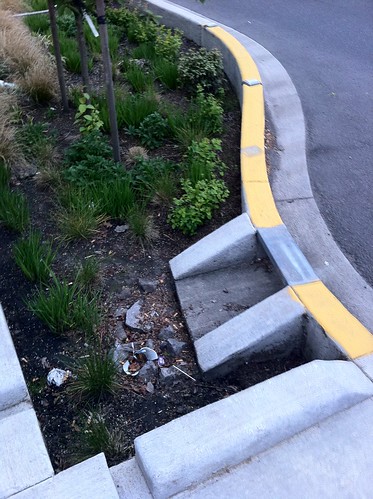 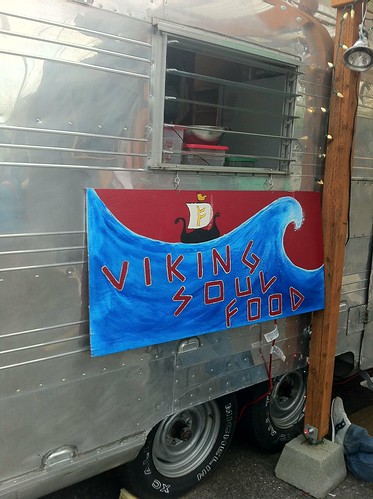 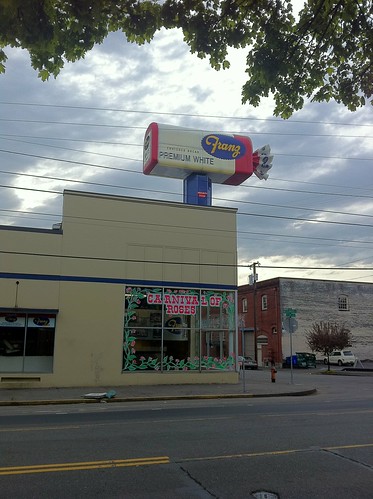 I took the necessary transit shots of the MAX train, made the requisite pilgrimage to Powell's Books, and even learned a couple things about the city. Most interesting were the new bike lane on the Morrison St. bridge, walking up the stairs from the Eastside Esplanade, finding an old fire station (now available for lease as office space; Portland Architecture has some photos of the inside), what a bioswale looks like, what a lefse tastes like (thanks Viking Soul Food!), and the biggest rotating loaf of white bread I've ever seen.

Leaving on the Sunday meant an afternoon departure from Union Station, which afforded us some time to have dim sum at Ocean City Seafood at 3012 SE 82nd and a final pilgrimage to Powell's. From there we walked to Union Station to find a curving lineup within the station, though not too late to fill up on water and get our seat assignments. The only downside to an afternoon departure meant a late night arrival in Vancouver, which further meant having to go through customs at 11 PM. That went more pleasantly than the return from our last trip to Portland in 2009, where we had our bags fully searched by Canadian border guards. (At least on that occasion we arrived in the late morning because of our 7 AM departure from Seattle.) No big haul like last time. 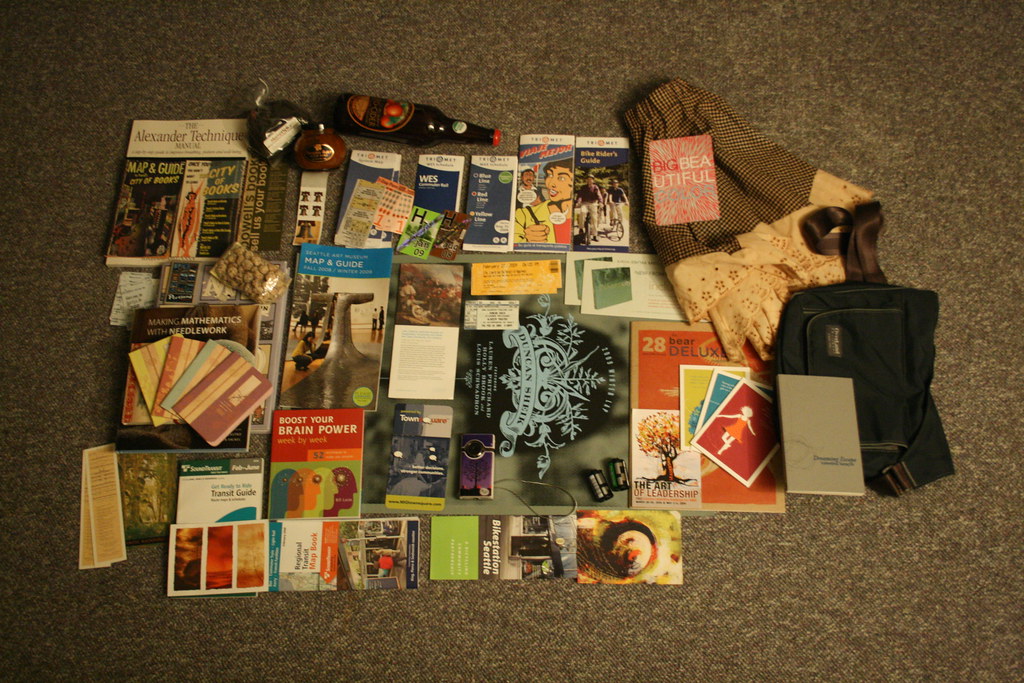 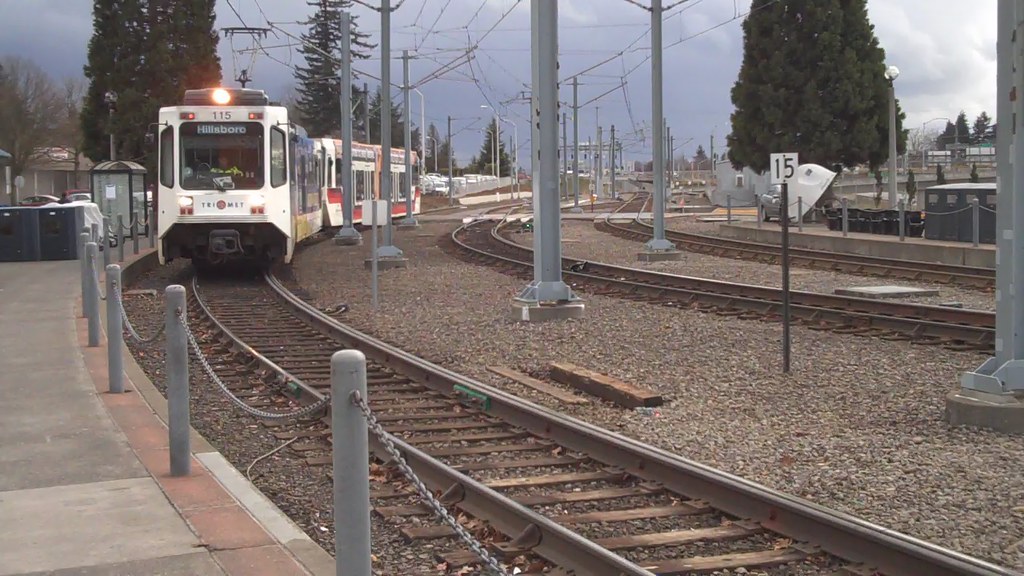 I've been following the Portland Apple Store saga starting with an article at Portland Architecture (which I submitted to Daring Fireball) and after a subsequent Portland Architecture article I see that John Gruber linked to Cabel Sasser's plea to Apple, the Landmarks Commission, and site developers to renew the project. Cabel, who lives on NW 21st and whose software company, Panic (which develops for the Mac), has an office on NW 10th, would have loved to have an Apple store in his neighbourhood. I'd love to know where he got the proposed design from, though it's possible I missed it from reading his article on the subject.