A Kind of Formal Clarity That Leaves Room For Unexpected Futures 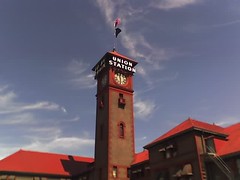 There is the obvious fact that the train departs from this station. Eight times a day, the permanent rolling stock of VbStoPe [Vancouver, Bellingham, Seattle, Tacoma, Olympia, Portland, and Eugene] rumbles to a halt at these doors, lacing the air with its acrid brake smoke, and sits waiting for its cargo of citizens to board or disembark. And there is the more important fact of Union Station’s architecture. In a remarkable century of smart choices, the architects who shaped the station have all hewn to a kind of formal clarity that leaves room for unexpected futures. Every stage of the city’s evolution has made its mark: from the boastful ambitions of 1896, to the social strains of ungainly growth between the wars, to the high egalitarian ideals of 1930s modernism, to the reactive constraints of the post-WW II period, to the city’s chimerical hopes for downtown “renewal” that came with late 20th century urbanism. Historical Union Station is neither preserved nor torn down. Rather, it accommodates history in an even-handed present that remains open to emerging futures, such as VbStoPe.

The photo is from Chuck Chenny, the text from an article on the architecture of Union Station by Matthew Stadler in Arcade, a journal about architecture and design in the Pacfic Northwest. There are articles in the journal about Vancouver's Pacific Central Station and Seattle's King Street Station as well.